Colin Powell, a retired four-star general and White House national security adviser who served as the nation’s first black secretary of state, died Monday as a result of complications from COVID-19, his family said.

The 84-year-old was fully vaccinated against the virus but had been treated over the past few years for multiple myeloma — a type of blood cancer that can limit the body’s ability to fight infection, according to his longtime aide.

In his four decades of public life, Powell was the first black man to serve as national security adviser near the end of Ronald Reagan’s presidency and chairman of the Joint Chiefs of Staff from 1989 to 1993. In the latter role, he oversaw the US invasion of Panama and later the US invasion of Kuwait to oust the Iraqi army in 1991.

“General Colin L. Powell, former U.S. Secretary of State and Chairman of the Joint Chiefs of Staff, passed away this morning due to complications from Covid 19. He was fully vaccinated,” his family said in a statement on Facebook.

“We want to thank the medical staff at Walter Reed National Medical Center for their caring treatment. We have lost a remarkable and loving husband, father, grandfather and a great American.”

Powell’s family did not address whether he had any underlying illnesses, but his aide Peggy Cifrino confirmed he had been battling multiple myeloma.

It wasn’t immediately clear what complications he suffered or how long Powell had been in the hospital prior to his death.

He is survived by his wife of nearly 60 years, Alma Powell, and their three children.

Powell was also the first black secretary of state during President George W. Bush’s first term from 2001 to 2005.

His reputation suffered a painful setback in 2003 when he delivered a speech to the United Nations Security Council to make the case that the US should go to war against Iraq.

He later admitted his speech was rife with inaccuracies and false intelligence that claimed there was evidence Iraq and Saddam Hussein were hiding weapons of mass destruction.

Powell resigned in 2005 and later referred to his UN speech as a “blot” that would forever tarnish his record.

In his 2012 memoir “It Worked for Me,” Powell wrote: “I am mad mostly at myself for not having smelled the problem. My instincts failed me.

“It was by no means my first, but it was one of my most momentous failures, the one with the widest-ranging impact.”

He added: “The event will earn a prominent paragraph in my obituary.”

Bush was among those to lead the tributes for Powell, saying he was “highly respected at home and abroad.”

“He was a great public servant starting with his time as a soldier during Vietnam. Many presidents relied on General Powell’s counsel and experience. He was such a favorite of presidents that he earned the Presidential Medal of Freedom — twice,” Bush said in a statement.

“He was highly respected at home and abroad. And most important, Colin was a family man and a friend. Laura and I sent Alma and their children our sincere condolences as they remember the life of a great man.”

President Joe Biden hailed Powell as a patriot who broke down racial barriers and “embodied the highest ideals of both warrior and diplomat.”

“Having fought in wars, he understood better than anyone that military might alone was not enough to maintain our peace and prosperity. From his front-seat view of history, advising presidents and shaping our nation’s policies, Colin led with his personal commitment to the democratic values that make our country strong. Time and again, he put country before self, before party, before all else — in uniform and out — and it earned him the universal respect of the American people,” Biden said in a statement.

“Above all, Colin was my friend. Easy to share a laugh with. A trusted confidant in good and hard times. He could drive his Corvette Stingray like nobody’s business.

Biden added, “Colin Powell was a good man. He will be remembered as one of our great Americans.”

In paying tribute to his friend and mentor, Defense Secretary Lloyd Austin said he felt “as if I have a hole in my heart.”

“He has been my mentor for a number of years. He always made time for me and I could always go to him with tough issues. He always had great counsel. We will certainly miss him. I feel as if I have a hole in my heart just learning of this.”

Secretary of State Antony Blinken, in remarks from the State Department, said Powell never bothered with formalities or cared for hierarchy.

“Secretary Powell trusted the career workforce here. He empowered them. He made sure that the desk officer, who knew a particular country or issue most deeply, was the one who got to brief him or the President,” Blinken said.

“He wanted to hear from everyone. He walked around the building, dropping into offices unannounced, asking what people needed, making sure they knew he was counting on them.”

Born in Harlem to Jamaican immigrant parents, Powell was raised in the South Bronx and graduated from City College of New York before joining the US Army.

In his 35 years as a professional soldier, Powell served two combat tours in Vietnam and held many command and staff positions before retiring as a four-star general.

As Reagan’s national security adviser, Powell helped negotiate treaties and cooperation with Soviet President Mikhail Gorbachev at the end of the Cold War.

“Our strategy in going after this army is very simple,” Powell said at a Pentagon briefing regarding the military’s strategy. “First, we’re going to cut it off, and then we’re going to kill it.”

When he was selected by Bush to serve as secretary of state, the president-elect lauded him as an “American hero, an American example and a great American story.”

“It’s a great day when a son of the South Bronx succeeds to the office first held by Thomas Jefferson,” Bush said in December 2000.

“I would say of General Powell what Harry Truman said of General [George] Marshall: He is a tower of strength and common sense.”

After resigning from the Bush administration in 2005 in the wake of his UN speech, Powell joined the venture capital firm Kleiner Perkins, where he worked as a strategic adviser and continued his ongoing work with America’s Promise Alliance.

Despite working as a public servant under GOP administrations, Powell went on to publicly endorse Democratic presidential candidates in recent years.

He supported Barack Obama in 2008 and endorsed Joe Biden in last year’s presidential election, prompting a scathing response from President Donald Trump, who slammed him as a “real stiff.”

In a leaked email he allegedly sent to a Democratic donor in 2014, Powell said he didn’t want to vote for Hillary Clinton because she was a greedy defender of the status quo whose husband is “still d—king bimbos at home.”

When asked about the authenticity of the email, Powell told The Post, “Jeez, don’t remember this one. Best to ignore, don’t you think?”

Powell later said publicly he would vote for Clinton over Trump. 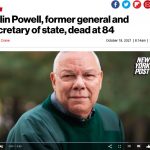