Charlotte, NC — “Eugenics is the practice or advocacy of improving the human species by selectively mating people with specific desirable hereditary traits. It aims to reduce human suffering by ‘breeding out’ disease, disabilities and so-called undesirable characteristics from the human population. Early supporters of eugenics believed people inherited mental illness, criminal tendencies and even poverty, and that these conditions could be bred out of the gene pool,” the History Channel states.

Pfizer CEO Albert Bourla had an hour-long interview on Tuesday with Frederick Kemp of the Atlantic Council in which he calls mRNA shots a “gene editing,” which is an admission the mRNA jabs are not vaccines. Bourla also claims that scientists can “repair the mistakes” in DNA, or in other words they can play God.

By looking at the Atlantic Council’s website, it is a globalist and collectivist organization in the vein of the World Economic Forum.

Gene Drive Files has published uncovered records and emails for years showing the American military is the largest funder of “gene drives” funding as effectively a bioweapon.

“Gene drives are a gene-editing application that allows genetic engineers to drive a single artificial trait through an entire population by ensuring that all of an organism’s offspring carry that trait. For example, recent experiments are fitting mice with ‘daughterless’ gene drives that will cascade through mouse populations so that only male pups are born, ensuring that the population becomes extinct after a few generations,” the website states. It adds: “Proponents have framed gene drives as a breakthrough tool for eradicating pests or invasive species. However, the Gene Drive Files reveal that these ‘conservation’ efforts are primarily supported by military funds.”

One has to wonder what to think when the so-called “fact checkers,” like Reuters, has called anyone calling the jabs “gene editing” or “gene therapy” as spreading misinformation, yet you have the CEO of Pfizer calling it just that.

Dr. Joseph Mercola has been shunned by the mainstream for honestly calling the jabs what they are. In March, he wrote: “In short, they know labeling them as ‘gene therapies’ would be like slapping a skull and crossbones label on them. Most people have enough common sense to realize that gene therapy is a different ballgame from a regular vaccination, and might be a bad idea, especially for children and younger individuals.”

Health Impact News provided an edited video of the lengthy interview showing some of the notable quotes by Bourla.

Asked about the various uses of mRNA, Bourla says: “There’s a third application which is for people that they are born with a mistake in their DNA code. And there are a lot of rare diseases that are happening to people because somewhere in one’s history there’s one small mistake in their DNA. Those people they have to live without until the ends of their lives, and sometimes their lives don’t last very long because of this mistake in their genes.”

Such a comment brings what is happening in Iceland to mind where that country is systematically killing off babies supposedly diagnosed with Downs syndrome through abortion. As Life Site News reported: “A new report from CBS News details how 100 percent of babies in Iceland who are diagnosed with Down syndrome prenatally are aborted.”

Kemp praised Bourla for producing the “fastest approved vaccine in history” that he claims “quite literally has saved millions of lives.”

While Bourla claims he’s “saved millions of lives,” he said there are “professionals” who on purpose “circulate misinformation” who he calls “criminals because they literally cost millions of lives.” He hedges his bets by saying there “are very good people” and “decent people” who are afraid of the shots, but there’s some seedy conspiracy among unknow people who are “criminals.” He also states that the CIA and FBI are working with Pfizer to warn them of “attacks” of “misinformation.”

What should be noted is that Kemp’s statement that Pfizer’s jab is “approved” is misinformation itself. No shot on the market is approved with all those in use under emergency use authorization.

Bourla is no stranger of spreading misinformation himself. A Pfizer whistleblower recently accused the company of faking trial data while some Pfizer actions suggest it knows its shot is unsafe for kids but is hiding the data.

Vasko Kohlmayer detailed the misinformation from Bourla and Pfizer from the very start claiming 95 percent efficacy in November of 2020, something that is clearly untrue based on the endless boosters.

“This mad rush to get injected by so many turned out to be a windfall for Pfizer. The company sold hundreds of millions of shots and posted record profits,” Kohlmayer writes. “Soon, however, cracks began to appear in Pfizer’s narrative. It turned out that the ‘protection’ afforded by its vaccine was rather short-lived. Studies showed that Pfizer-induced antibodies fade quite quickly. After six months, half of those injected have none. Unashamed and undaunted, Pfizer came out with a booster. The coerced and gaslit public lined up to receive it in surprisingly high numbers, which in turn further pushed Pfizer’s already hefty profits into the stratosphere.”

And while Bourla claims he’s “saved millions of lives,” the story on the ground appears to be different. A funeral director in the UK, named Wesley, said when the so-called “pandemic” began the government made a big show publicly displaying storage units to make us believe the deaths were piling up. Wesley said “it was all hyped from what I was seeing” and the fall of 2020 was “probably one of the quietist on record.”

However, “this time the storage units have been hidden, they were out of the way. And that’s since people were vaccinated,” Wesley said. He’s seen “the most funerals that you’ve ever done in two weeks, and they’re all aged 30, 40, no older,” after the jab rollout began. Additionally, he’s seen big increases in deaths by miscarriage and stillborn babies. 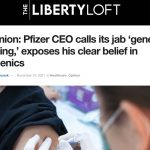