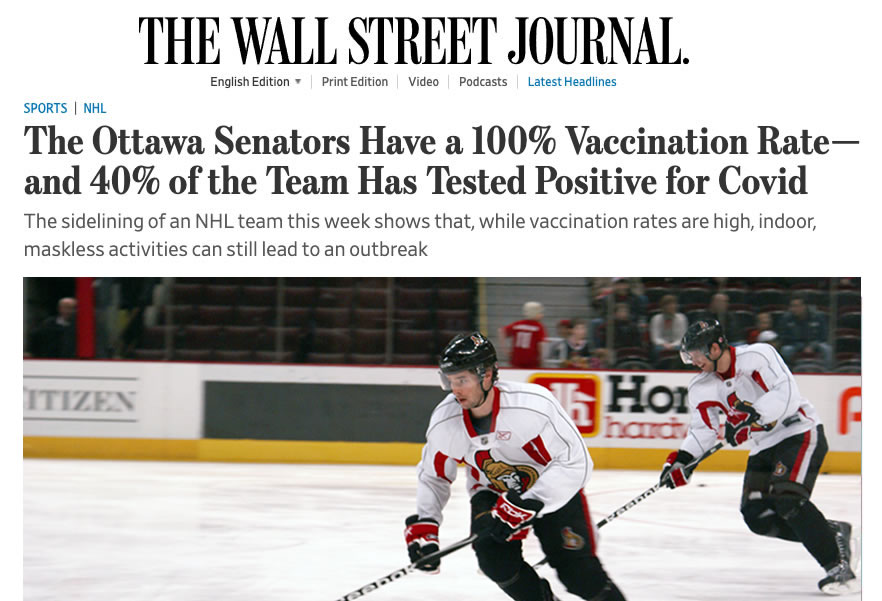 The Wall Street Journal has proven once again that the COVID vaccines are so useless that an entire NHL hockey team, The Ottowa Senators, were 100% fully vaccinated and yet 40% of the team still got COVID.

There are now thousands of cases like this proving that these aren’t rare breakthrough cases, but instead the norm.

Once again, the oligarch owned media that receive massive advertising revenue from the pharmaceutical giants, are proving that they can not be trusted.

This also proves, once again, that the COVID vaccines or so ineffective that they do not prevent you from getting, spreading nor dying of COVID.

Here’s the whole story from the Wall Street Journal

The Ottawa Senators Have a 100% Vaccination Rate—and 40% of the Team Has Tested Positive for Covid The sidelining of an NHL team this week shows that, while vaccination rates are high, indoor, maskless activities can still lead to an outbreak

A substantial Covid-19 outbreak that this week has sidelined the National Hockey League’s Ottawa Senators—despite the entire team being vaccinated—carries a warning for the coming months of professional sports: even with blanket immunization, pandemic disruptions are far from over.

The NHL announced the suspension of the Senators’ season through at least Nov. 20 after 10 players and one coach tested positive in recent days. The team says it is fully vaccinated, but hasn’t specified which shots players have received.

After nearly two years in which sports have delivered some of the most vivid case studies in public health, the Senators are presenting yet another: just how much Covid can still spread when a vaccinated group of people gather in poorly ventilated places and get up in each other’s bare faces. That’s a problem for every sport that plays indoors—and a warning for every coming holiday party.
The outbreak has sent the Senators off the ice to the longest Covid-related sports hiatus since vaccines became widely available and leagues persuaded nearly all of their players to get vaccinated.

Even in a league with a 99% vaccination rate, breakthrough cases on the Senators have now infected more than 40% of the roster. Yet epidemiologists say they are not particularly surprised. They have long warned that while vaccines are highly effective in preventing serious illness from the coronavirus, they’re not as foolproof in blocking infections, especially as time passes, immunity fades and the highly contagious Delta variant spreads—especially when other preventive measures are not also in effect.

“It’s hockey, it’s not like you’re going to have masking, distancing, ventilation working in your favor at all times,” said Isaac Bogoch, a University of Toronto infectious diseases specialist who is a consultant for the National Hockey League Players Association.

He added: “We can see the effectiveness of the vaccines are slightly waning with time and it’s real, but we have to remember it’s waning against getting the infection — the vaccines are holding a lot of their strength against severe illness.”

Throughout the pandemic, professional sports leagues like the NFL and NBA have generated rich data that has helped scientists better understand Covid-19. Now, with football season in full swing as the Delta variant spreads, WSJ’s Shelby Holliday looks at what we’ve learned so far.

The problem isn’t just that hockey is played without face-coverings, six-feet-apart stickers and opened windows. The NHL and other leagues have also peeled back the heftier testing regimens that they deployed in the pre-vaccination era. Fully vaccinated players are only required to take a PCR test every third day, while unvaccinated players must continue doing so daily. Vaccinated players need only take daily tests if they are identified as a close contact of someone who has tested positive; unvaccinated players can be sent into quarantine.

Professional hockey played its first pandemic season inside a bubble akin to the National Basketball Association’s Disney “campus setting.” It’s no coincidence that the two most prominent indoor professional sports in America chose a form of lockdown to be able to play on inside, while football and baseball soldiered on outdoors though found themselves struggling with indoor activities such as dining.

Actually, hockey went one step further than basketball and made a “double bubble” for its 2020 playoffs. Players were not only in a sealed environment with limited contact with people from the outside world, but that outside world happened to be communities in Canada with very low rates of Covid cases.

Outside of that bubble, there were rich examples of how easily the virus could spread inside an ice rink. In a paper published by the U.S. Centers for Disease Control and Prevention, Florida health officials recounted a June 2020 recreational hockey game in Tampa Bay during which a presymptomatic but infectious player appeared to have transmitted coronavirus to eight out of 10 teammates, five out of 11 players from the opposing team, and one rink staff member.

“The ice rink provides a venue that is likely well suited to Covid-19 transmission as an indoor environment where deep breathing occurs, and persons are in close proximity to one another,” the authors wrote. “The high proportion of infections that occurred in this outbreak provides evidence for SARS-CoV-2 transmission during an indoor sporting activity where intense physical activity is occurring.”
Finnish researchers found an asymptomatic carrier of Covid-19 in an under-20 team had infected 22 of 28 teammates, that another 24 players from two opposing teams the under-20s had just played tested positive in the next two weeks, and since some of those players were training with senior teams, an additional three infected players were detected.

The Senators’ outbreak for now presents only a minor scheduling headache for the NHL, which must now squeeze two additional games into the remaining 23 weeks of the regular season. That’s a bit harder to do in 2022 than most years, as the NHL is taking a three-week hiatus in February to allow players to represent their countries at the Beijing Winter Olympics.

Bogoch said that his prescription for hockey was to “carry on carrying on,” he said. “When you think about how contagious Delta is, how many games have been played… all things considered, it’s going OK.”

He said he saw no need for a return to the bubble, but he also didn’t want to see hockey drop all testing and just let players spread infection.

“A bubble I don’t think is reasonable at this point in time; nor is pretending that the pandemic is over.”

Write to Louise Radnofsky at louise.radnofsky@wsj.com and Laine Higgins at laine.higgins@wsj.com

Archived Source (not behind paywall): https://archive.ph/FJEhW 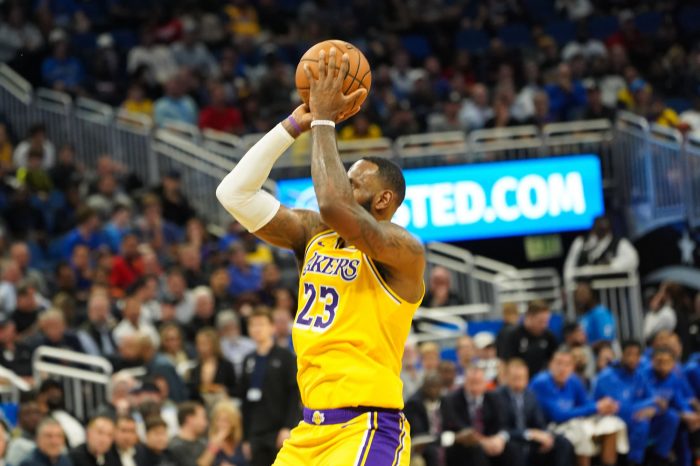 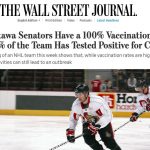